This time we post filming locations based on twitter’s request. The movie called 溺れるナイフ, with English title Drowning Love or The Knife That Dropped in Water. It was released in 2016 and have been played in 2017 Japanese Film Festival Indonesia. I did not watch it that time. So I just knew and enjoyed it after @ChaCrayong requested us for covering the filming locations of this movie (thank you!). And yes, the scenes and places are beautiful that they are worth our search and post here.

This movie basically showed the scenic views of Wakayama Perfecture in Kansai Region. The first place that caught your eyes will be the “forbidden area” where Natsume (Komatsu Nana) met Kou (Suda Masaki) for the first time. I’m not sure where the exact place is, but judging from the torii, it may be in 弁天島 (Benten Island), Natchikatsuura.

My internet search resulted that this forbidden place may be specially edited for this movie by combining Shirashaki coast and Izumo coast areas. Meanwhile, the second location where Natsume and Kou met again (that was portrayed to be the same location as the place where they first met) is in Asaki Shrine (朝貴神社) area in Kushimoto.

Next is the red bridge that you see quite often in this movie, Shinkumanoo Bridge (新熊野大橋) in Shingu City.

One of the remarkable places I found in this movie is Natsume’s grandfather’s house. It is actually a Japanese guesthouse called Adzumaya Ryokan (旅館 あづまや). They did not even change or cover up its name board for this movie! You can book a room and enjoy this ryokan’s services during your visit. In addition, it is close to the place where Natsume and Kou had their first kiss, the Yunomine Onsen, which is one of the oldest hot springs in Japan. 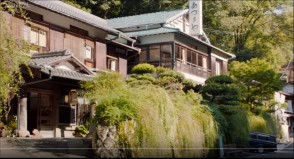 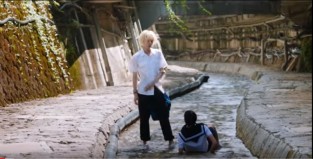 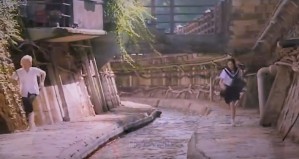 Not as scenic as the other locations, shopping area where Natsume and Kou are ready for the festival is super easy to find. It is right in front of Kii-Katsuura Station. The shops are real!

The next location is a beautiful forest called Nachi Forest that is part of Kumano Kodo pilgrimate routes. There is also a scenic Nachi falls which is the highest waterfall in Japan. Down the hills, there is Daimonzaka and its beautiful cobblestone staircases. 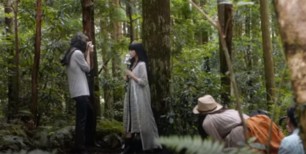 Last but not least is the ending scene that took place in the toll road around Shirashaki Coast.

Bonus: if you ship Natsume with Ootomo instead of Kou, or you are a fan of ジャニーズWEST’s Daiki Shigeoka, kindly visit this blog for more locations. It covers school and places where Ootomo and Natsume went together. Although it is in Japanese, Google translate will be able to help you.

Do you have a request for us to cover filming locations of certain J-movie or Jdorama? Just poke us through our instagram, twitter, or drop your comment in one of our blog posts here. We are pleased to do it 😉