We finally made it to Fukuoka! And of course we went around Hakata as if we’re Bambino!. One thing we found about this city, or Fukuoka in general, is that you may lost in bridges. Seriously, this area has sooooo…. many bridges. No wonder, for Bambino itself, there are at least three bridges that was filmed in the dorama.

Naka River, where the three bridges crossed over

The first bridge is called Nakagawa no Nishi Ohashi. This bridge appeared in Episode #01 when Ban and Eri rushed from their campus to the restaurant for their part time job. Also in Episode #04 when Ban decided to go back to Tokyo. In one episode of VSA, this scene was complained by one native Fukuokan because Ban took the wrong direction.

Did you spot the “Are You Happy?” hoodie?

Paralel to this bridge, there is Fukuhaku-deai Bridge which was set as the meeting place for Ban and Eri when they were dating in Episode #04. This bridge apparently very popular for a meeting place since it was named after the location where the samurai town of Fukuoka and the merchant town of Hakata meet (source). 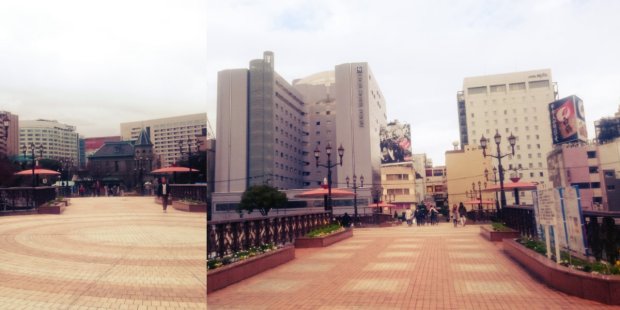 A wide bridge equipped with benches and flower garden. Perfect for a date? 😉

This bridge is part of Tenjin Central Park, probably a must-visit place in Fukuoka. During spring and summer, this park must be very beautiful and full of people. Unfortunately, we went there during winter and it’s freezing. So, let’s forget spending hours enjoying this park and look for something warm instead. 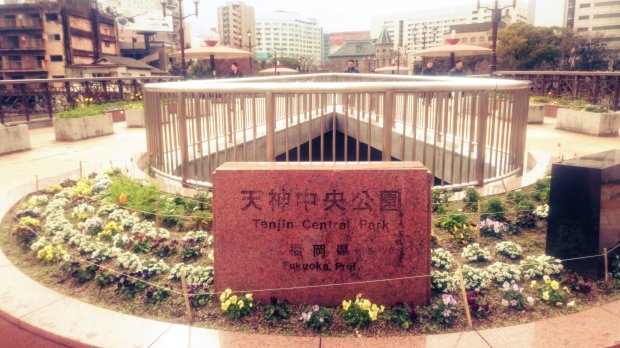 The last bridge is the most narrow and somewhat unattractive compared to others. We looked for this bridge because for me in particular, it was the most memorable bridge from Bambino. Why? Because Ban was being DoM there (remember how I love seeing Matsujun was bullied in a dorama?) 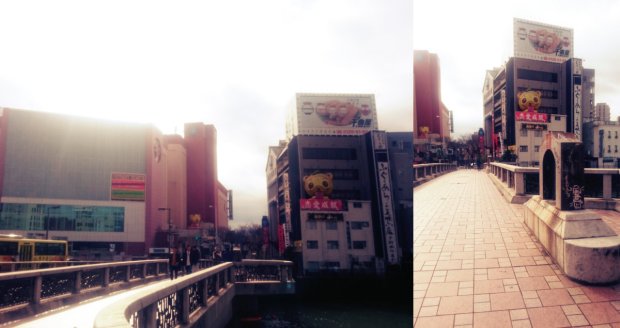 Nakasu Bridge. Oh no! The poles and the lamps have gone…

We still have more posts about Bambino! in Fukuoka, stay tuned!

What: Nakagawa no Nishi Ohashi, Fukuhaku-deai Bridge, and Nakatsu Bridge
Where:Fukuoka, Japan [map]
How to go: Take subway to Tenjin-minami station or Tenjin Station
How much: free, just pay for the train fare